skip to main | skip to sidebar

It has been a few since I updated, but I will keep on keeping on.

The project with fourth grade was a great one, and not only because everyone got a chance to use gold paint (magic), but also because of how personal and unique each project turned out to be. This lesson was introduced by first letting the kids take a close look at Gustav Klimt's Tree of Life painting, noticing all of the symbols, techniques and ideas that they could see in his work. 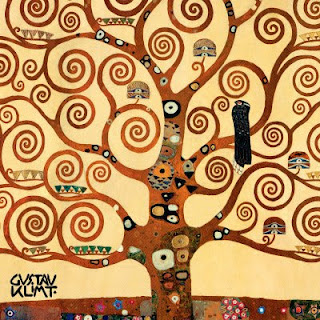 After each student had a chance to look for a minute or two, I talked a little about Gustav Klimt, pointed out on the map where he was from, and showed a couple other examples of his paintings. I let the kids start a group discussion and share ideas about what they saw in the painting. Some of the responses were geometric shapes, spiraling branches, colors in the tree, eyes and other symbols, and colors and patterns in the ground. We also talked about sketchbooks, and how artists come up with ideas when they're working on a project. It made me happy when a few kids said, "I have a sketchbook that I draw in at home!" How awesome is that, and I told everyone, the project is almost going to be like a self portrait, because you are going to add symbols to your tree with cut paper that say something about you and the things that you like. We talked about why the painting may have been called tree of life, and I remember one student saying, "maybe because the artist wanted to show things in their life that are special."

This photo is of in progress trees, and shows how the students began by painting the tree, and then added cut shapes (colored for the ground, black and white for in the tree) 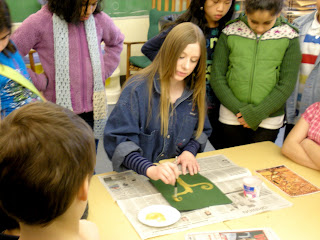 I did a demo on how easy and fun it is to use the gold paint to make the spiral branches, by making a trunk, and then adding the branches out from the trunk. I showed them how to hold the brush straight so they had more control over it, and how the branches can be added to fill the space on their paper. I kept a reproduction of Gustav Klimt's painting at each table so the students could refer back to it when working, and also be inspired by it. There are so many wonderful things to be looked at in that piece. 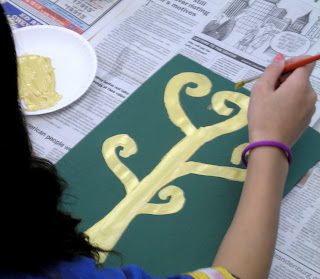 The kids were awesome at painting because they love it, and the gold tempera also helped. They also became fascinated with how the water cup looked after they rinsed their brush. "WOAHHH, MAGIC WATER!" Haha it was fun. 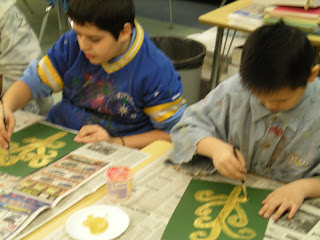 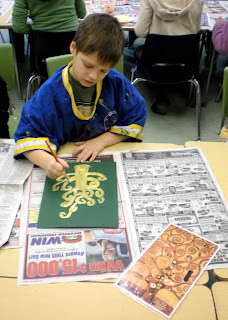 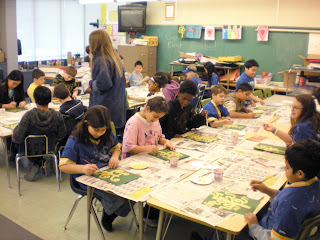 Overall, a great assignment that turned out beautifully. I also loved walking around the room and asking each student while they were working what kinds of things the shapes they were going to use represented. Their responses were all unique, and you could tell when they were talking about it that they were really thinking in depth, at how they would represent each thing with simple black and white shapes. I was lucky to be able to work with such a creative bunch :)

Posted by Lindsay Parrish at 2:39 PM

It's Nice to Have Friends

Lindsay Parrish
I'm always chewing gum, I've always got something written on my hand, and I drink too much coffee. I love kids and can't wait to be a full-time teacher and illustrator. I'm also interested in records, bubble wrap, horror movies, and scratch and sniff stickers.