skip to main | skip to sidebar

Time to continue on with lessons. Here is what the second grade classes did for their project with me...


This lesson was all about shapes, textures, and experiments. The first thing that I did with the kids was read them this wonderful story 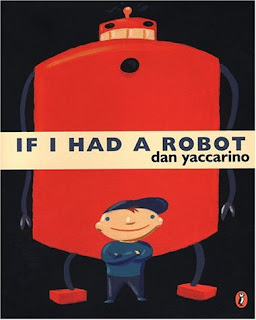 I told them while I was reading and showing them the illustrations to really look at the robots, and notice what different geometric shapes make up parts of their bodies, and how each robot is a little different from the next robot. We also reviewed the shapes so that they would know what to look for, so I just asked, "what shapes do we know that we've learned to use in art class?" So we reviewed circles, rectangles, triangles, squares, ovals, etc. That way, they could enjoy the story and the illustrations while still thinking about ways you can build a robot.


After the story, I told them about how they would each get a piece of black 9" x 12" construction paper and everyone at their tables would share metallic and glitter crayons, and what they would do is create an outer space background with planets, rocket ships, stars, space ships, comets...pretty much whatever they wanted. I did a demo on some ways that they could use the crayons to create these things. I showed them how to take the metallic crayons, press hard to make a shiny dot, and very lightly color around the dot to make a glowing star (which is much better than those awful 5 point stars that they like to make sometimes. I did a nice dramatic speech about how second graders can draw much prettier and more realistic looking stars and I drew one of those 5 point stars on the chalkboard and drew a big X through it. They laughed a lot at that one). I also showed them how they can layer different colors of crayons on top of eachother to make a fun looking planet. Finally, I did a demo on how easy it is to draw a spaceship using just ovals and circles (and zig-zag lines for lasers). 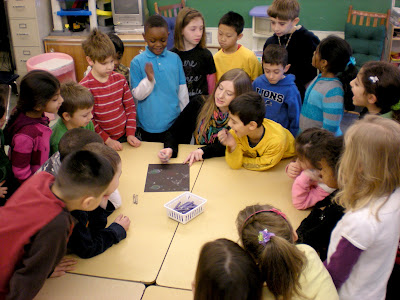 So after this hullabaloo, and while they were coloring and making spaceship noises to themselves, I was cutting 8273472637485 squares of neon paper like a fiend for them to build their robots out of. I told them that the only part of their project that would have hand drawing or coloring would be on the background. Every part of their robot was going to be cut out of paper.
Then when I handed out the papers, I did another demo on different ways they could fold their paper to make fun robot parts. I showed them accordian or fan folds to make arms and legs, I showed them how to cut the paper to make a window for a helmet, and I showed them how to make a little door for either a battery pack or for where the buttons hide. They had so much fun with this. I told them when they were all done with their bodies, that if they wanted neon pipe cleaners for their antennas, arms, or legs, I would help them attatch those to their papers. I showed them that they could wrap the pipe cleaners around a pencil to make them wiggly, or that they could do an accordian fold on a pipe cleaner just like they did on their papers for a zig-zag. Then after allll of this was done, I brought out the googly eyes. Everything looks better with googly eyes. I told them they could have 2 googly eyes if they wanted, and of course, most of them did.
I absolutely loved doing every step of this project. The kids got a chance to build on their knowledge of shapes and textures, really use their imaginations and creativity, relate everything back to a story, and learn new ways to use materials that they've already tried before. It was a project I would DEFINATELY do again :) 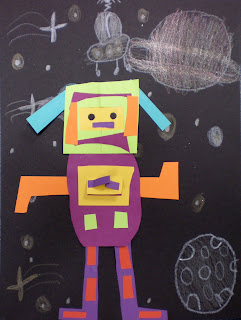 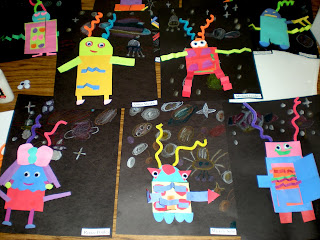 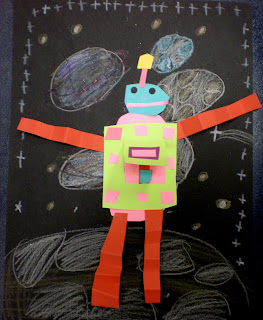 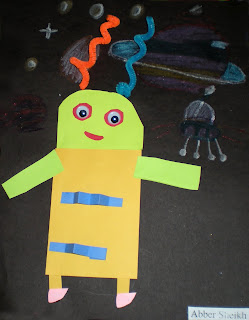 Posted by Lindsay Parrish at 2:42 PM

It's Nice to Have Friends

Lindsay Parrish
I'm always chewing gum, I've always got something written on my hand, and I drink too much coffee. I love kids and can't wait to be a full-time teacher and illustrator. I'm also interested in records, bubble wrap, horror movies, and scratch and sniff stickers.